In the British live TV show “Dancing on Ice”, a figure skater is skating among the dancers with a Sony HDC-P50 camera and Canon HJ14 lens. This broadcast camera is stabilized and remote-controlled through a NEWTON system and the results are unique in the broadcast world.

Dancing on Ice is a British television series that features celebrities figure skating with professional skating partners in front of a panel of judges. Each season has 10 shows that airs live on ITV from January to March and each show has around 6 million TV viewers. The series started in 2006 but was cancelled in 2014 and then revived in 2018 with a new TV studio at RAF Bovingdon. With the revival, the production hired Alan Wells Camera Services, which supplies a rail cam along the skating rink and since the 2019 season has helped introduce a new camera angle to the show, the Ice Cam.

The Ice Cam consists of the figure skater Jordan Cowan, wearing a Ready Rig that holds a NEWTON stabilized remote head. The head features a Sony HDC-P50 broadcast camera and a Canon HJ14 lens that is remote controlled by cameraman Dominic Jackson, through the renowned NEWTON control panel at a normal operator’s desk.

Jordan Cowan is an American figure skater who used to compete in the national team, and since a few years, he is bringing cameras onto the ice to film figure skaters under the name “On Ice Perspectives”. In mid-2018, Cowan heard through a friend that the producers of the reality show “Dancing on Ice” in London, UK were looking for a cameraman who could skate. Jordan explains: “I contacted the producer and showed them some of my recent video productions. They liked it and hired me for the 2019 season, making me the first ever skating camera operator for a live televised skating show.“

Cameraman Domenic Jackson had operated a Steadicam on “Dancing on Ice” for several seasons and he used to walk out on the ice, with spike shoes, to shoot links in and out of dance numbers. In October 2018, ITV asked Alan Wells to put together a rig that could move faster on the ice and replace the Steadicam. Alan Wells first thought of a push trolley featuring a remote stabilized camera head but soon abandoned it for a handheld solution. The outside broadcast company Telegenic supplies the cameras and lenses for “Dancing on Ice” and with their input, the team at Alan Wells customized a Ready Rig so it could control a Sony HDC-P1 camera and Canon HJ14 lens. This was achieved by adding carbon fiber brackets on the Ready Rig so it could hold a NEWTON stabilized remote head, which is rarely used handheld, but that Alan Wells use for broadcast on cable cams and rail systems. Unlike typical handheld gimbals, NEWTON has a control panel that features a standard broadcast setup for camera angle and lens, which is much more suitable for professional TV cameramen.

During the development of the camera rig, the team at Alan Wells had conference calls with Jordan and when he arrived from USA, they could do the final customizing to Jordan’s body and arrange the balance of the gear to allow full movement. They also met up with the “Dancing on Ice” production at the Bovingdon studio, to do tests with camera supervisor Lincoln Abraham and director Nikki Parsons. The final wireless camera rig, the Ice Cam, weighed 15 kg and included an RF system for data communication, a Boxx Link for video, batteries and a monitor so Jordan could see the picture. Jordan comments the weight:

The rig could be lighter, but NEWTON was the only gimbal that could keep a steady horizon through all the twists and turns at high speeds on the ice, while carrying the standard 4.3-60 mm zoom lens. NEWTON also requires less clearance for the 3-axis motors which, while requiring counterweights, meant I could let the rig hang close to my body and thus keep it close to my center of balance. 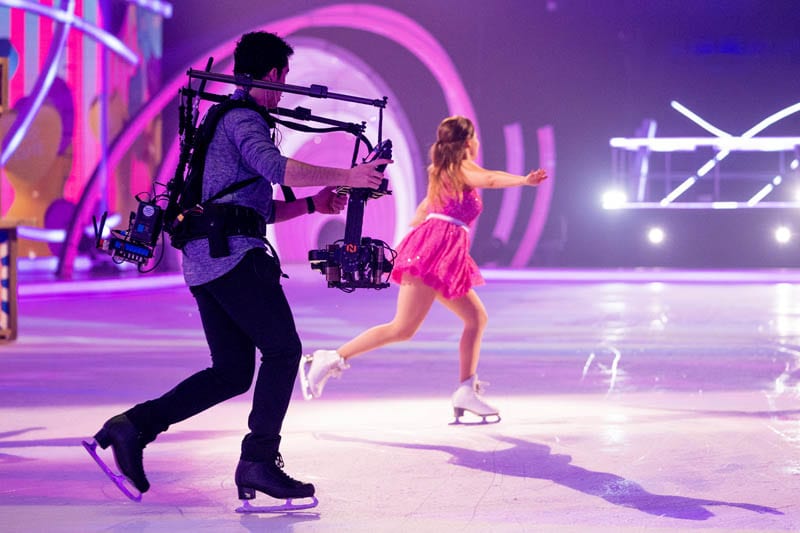 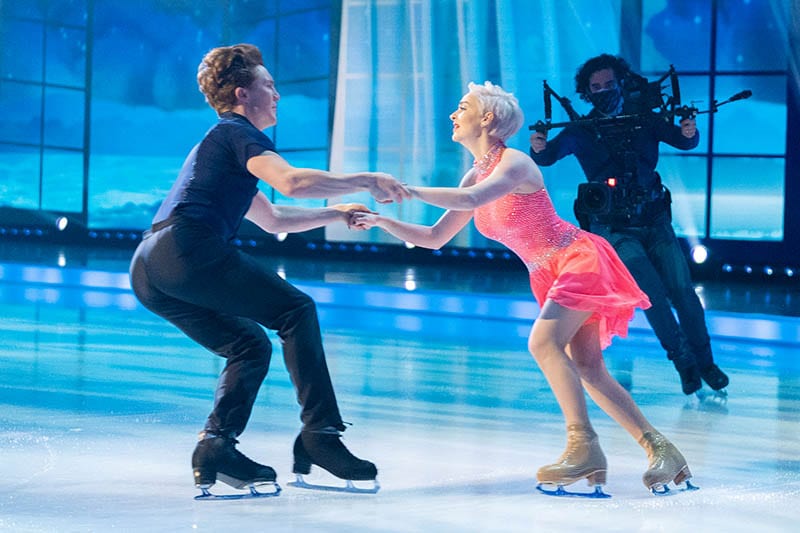 Tally light showing when Ice Cam is live on air

At the TV production

Dancing on Ice is rehearsed on Saturdays as they do a full camera run-through of all music numbers and this amounts to three rehearsals per dancing couple. Then on Sundays all the links are rehearsed with the presenters and there is a full dress run before the live show at 6 PM.

Since Dominic had been a camera operator on the show for several seasons, he knew the format well but controlling a skating camera was new. He soon realized that he needed line of sight to Jordan so he arranged his control desk so he always could see where the camera was in relation to the dancers. Apart from hearing production talkback, Dominic and Jordan have a radio system that allows them to talk to each other.

Jordan is an experienced skater, so he knows how skaters behave and to read their movement during the show. However, he had only filmed skaters with a DSLR gimbal before and never on a TV set, so he had a steep learning curve about live TV production; Technical sides and terms, to count bars and beats whilst listening to the director, the PA and Dominic, being aware of other cameras, what shots are before and after to keep out of the other cameras. Jordan elaborates: “Dominic has been an essential part of the show for me and his experience working with Nikki was invaluable. We work closely together on headset the entire weekend through rehearsals and the show. Dominic taught me everything I needed to know to work in a live multi-camera broadcast situation and taught me how to translate Nikki’s shot cards. He’s been a great mentor as well and I’m lucky to have learned so much from someone so experienced in live broadcast television.”

The new perspective of the Ice Cam was well received by the UK TV viewers and after the first season in 2019, Dominic Jackson and Jordan Cowan were nominated for the GTC Awards for Excellence. The Guild of Television Camera Professionals stated the following reason for their nomination:

“A whole series of brilliant teamwork bringing some spectacular shots that fitted in seamlessly with the live performances and the rest of the camera coverage. The addition of the Ice Cam to the show helped audiences get closer to the action and feel as though they were on the ice with the skaters. I don’t believe anything like this has been done on an ice-rink on a live broadcast before and the skill and synchronization required of Dom and Jordan deserves an award.”

Jordan continues: “The Ice Cam revolutionized Dancing on Ice and gave audiences a new way to appreciate the real speed skaters experience on the ice. The 360 degree shots also let us see the back of the studio and audience for the first time, something the show’s set designer really appreciated because he always puts work into making a full 360 degree experience. In December 2020, another British show, The Real Full Monty on Ice, also brought in the Ice Cam with me skating and Alan Wells in person behind the NEWTON controller.“ 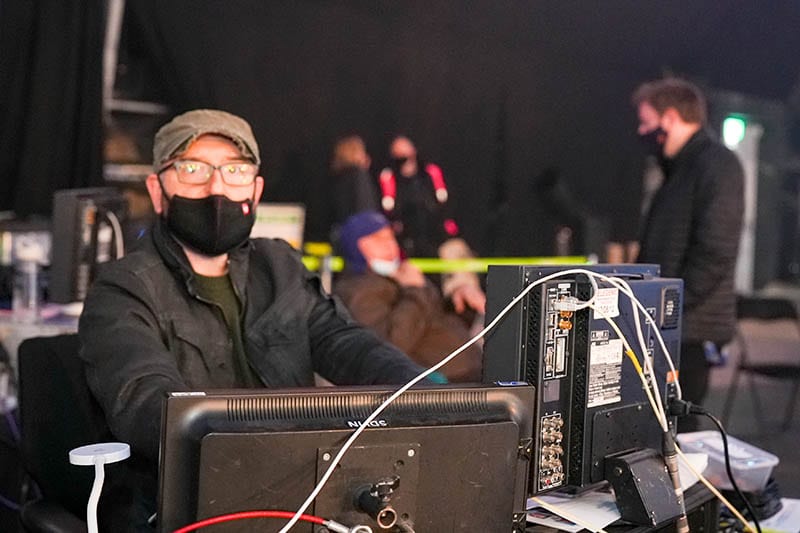 Dominic Jackson operating camera and lens on the Ice Cam

More remote cameras on the show

Apart from the Ice Cam, Alan Wells Camera Services also supplies another NEWTON stabilized remote head moving on a Ross Furio dolly on a completely bespoke track designed to follow the oval shape of the ice rink. The NEWTON stabilization helps transition between different radius curved track and the remote head controls another Sony HDC-P50 with Canon HJ14 lens which unlike the Ice Cam is cabled to the production. The company also supplies a hothead above the ice rink which offers shots of the skaters and the light projections on the ice.

After the 2021 season of Dancing on Ice, Jordan Cowan will continue to develop his “On Ice Perspectives”. He explains: “I want to keep pushing myself into the professional TV and movie world, because I believe that seeing skating in television, movies and on live TV shows is going to be so important for the future of this sport.” See more about: Jordan Cowan – On Ice Perspectives 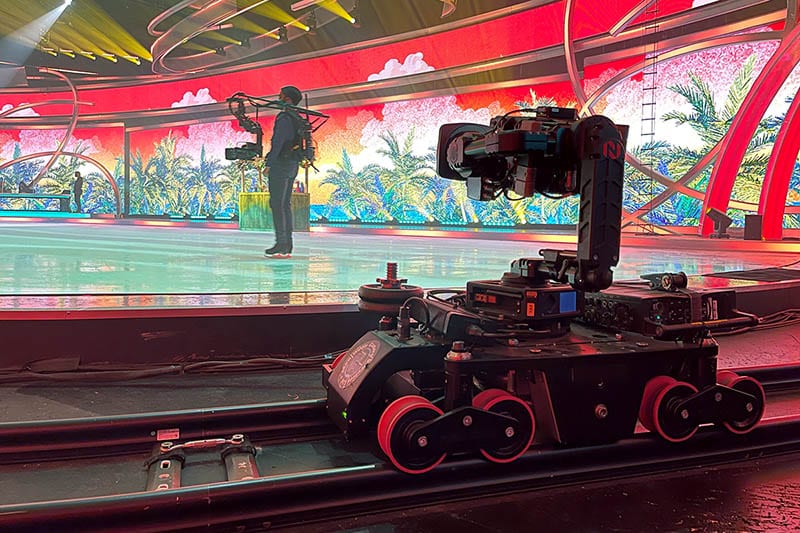 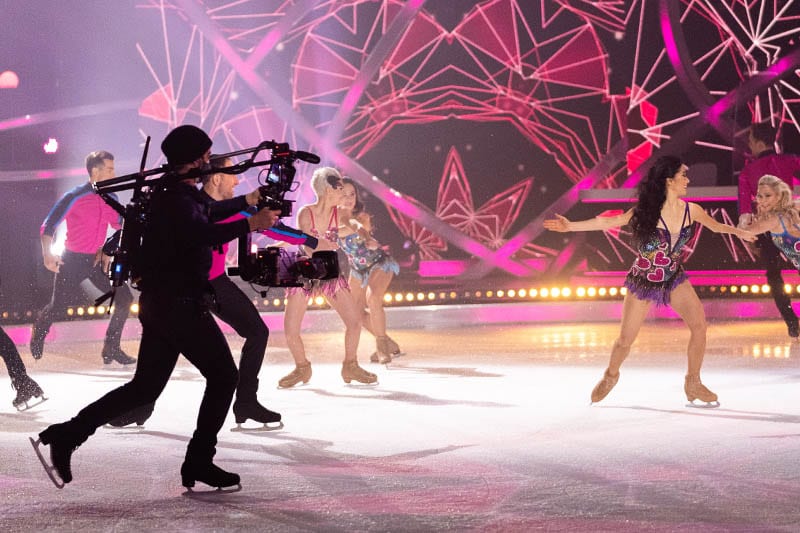 Jordan Cowan knows how to move among the skaters 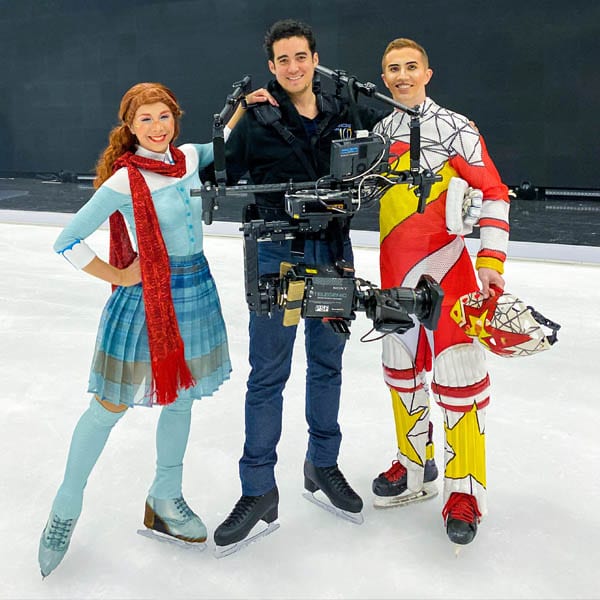 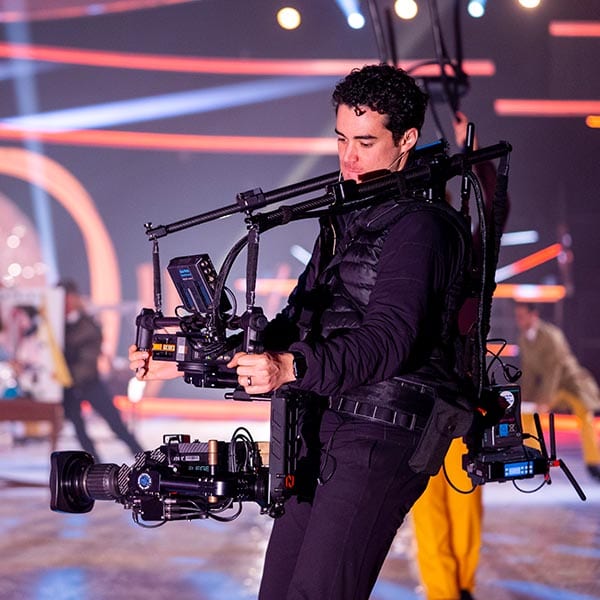 Mixed clips of the TV image from the 2020 season

Footage from a 360 camera on Jordan’s Ready Rig

TV image in sync with the 360 camera on the rig