Newton Nordic manufactures remote camera systems that are intended the production of fluid images at live TV broadcast. Here follows a discussion about the creation of different types of dynamic shots in TV production. 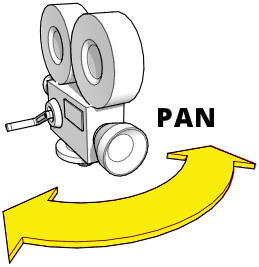 When panning, the camera does not change location, but it rotates from side to side so it aims more to the left or right. Hardly any camera in TV production is totally fixed and pan is the most common movement of the camera frame. For example, the stationary tripod cameras on a football game are panning a lot during a game to follow the ball. If they pan fast, so the picture gets blurry, it’s called a whip pan, and it’s mainly used to as a necessary means to stay on the ball. In cinema, whip pan is more used to cut between two scenes in a more dramatic way.

The NEWTON remote camera system pans in 360 degrees per second without end stops, so it can follow the ball on each side when hoovering above a football field on a cable cam system. 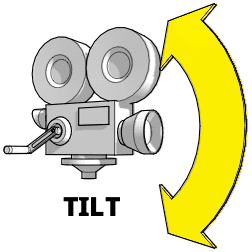 Tilting is when the camera rotates to aim upward or downward without changing location. Tilt is sometimes called “pitch” of the shot.

When hanging on a camera crane, the NEWTON stabilized remote head can tilt 65 degrees up until the lens reaches the base, and it also tilts down 135 degrees, more than straight down. 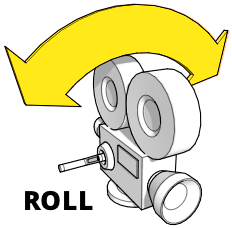 Roll is a rotational camera movement that rotates the camera over its side on its long axis. Camera roll usually feels dizzying and unnatural, and for this reason, it is used to disorient the audience or create uneasiness. Roll is fairly uncommon in live TV broadcast but sometimes it’s used in for example the start of a artist performance, to make an effectful introduction and often combined with blurry focus etc.

The NEWTON remote system can roll the camera 60 degrees to each side.

Due to 3-axis gyro-stabilization, the NEWTON remote head is made for camera movement in all directions during live TV broadcast. 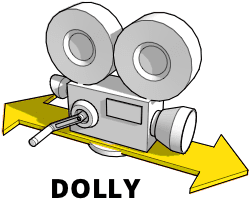 A camera dolly is traditionally the film industry term for a wheeled cart that is manually pushed on a rail and carries a mounted camera and its operator. These days the term is usually used for all kinds of platforms that move a camera and a “remote dolly” usually means a camera cart that is remote controlled electrically. See more at NEWTON stabilized head on remote dolly.

Dolly movement can be combined with zoom in the same or opposite direction. For example, if the camera moves on a telescopic crane or cable cam towards a singing artist at a concert while zooming in, the artist is enlarged very quickly with a dramatic effect. However if you zoom and dolly in the opposite directions, the subject stays roughly in the same size but the fore and background is changing in perspective. This creates an distorting and intriguing effect that is mainly used in cinema for dramatic purposes. 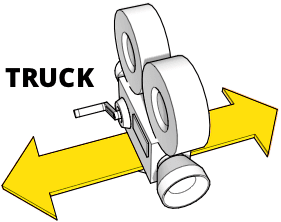 Like dolly movement, trucking involves moving a camera horizontally, often on a track, but to the left or right instead of forward or backward. This is often made with a remote dolly on a track placed along a stage or sport grounds, to move the camera sideways and capture the subjects at different angles.

With camera trucking you enable the viewer to stay with and follow a subject that moves. When the camera stays alongside the moving subject, it is called a tracking shot, and this is often made with long remote dolly systems, 1D cable cams and vehicles. For example, the home stretch at Nordic skiing often has a rail cam moving along the final sprint of the athletes and 1D cable cams are getting popular in horse racing. Marathons often feature camera operators on motorcycles, or cars with stabilized remote heads, that drive with cameras alongside the athletes. See more at NEWTON stabilized head on camera vehicle.

An arc shot is when the camera moves sideways but instead of straight, it curves in a rough semi-circle around the subject. For close ups on a stage, this is often made with a Steadicam but it involves camera operators in front of he performer. Therefore, this is better made with a curved rail system, a telescopic crane or a 3D cable cam, which can move faster, with more reach and more discretely. 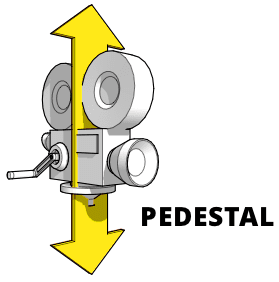 With pedestal movement, the camera moves up or down, often on a telescopic pedestal or tower. When you “pedestal up,” you’re moving the camera upward as opposed to “pedestal down”. In TV production you find telescopic towers that are fixed or mounted on remote controlled dollies, and they can both stand in the ground or hang from the ceiling. This enables moving cameras that are easy to hide put can pop up/down close to a performance while on air. Camera cranes and jibs are maybe the most common tool for vertical movement because of their ability of moving in other dimensions simultaneously, and for even more reach, 3D cable cams are also used. For example at the European football championship 2021, the Spidercam 3D cable cams became very appreciated for their vertical camera moves behind the penalty kicks. 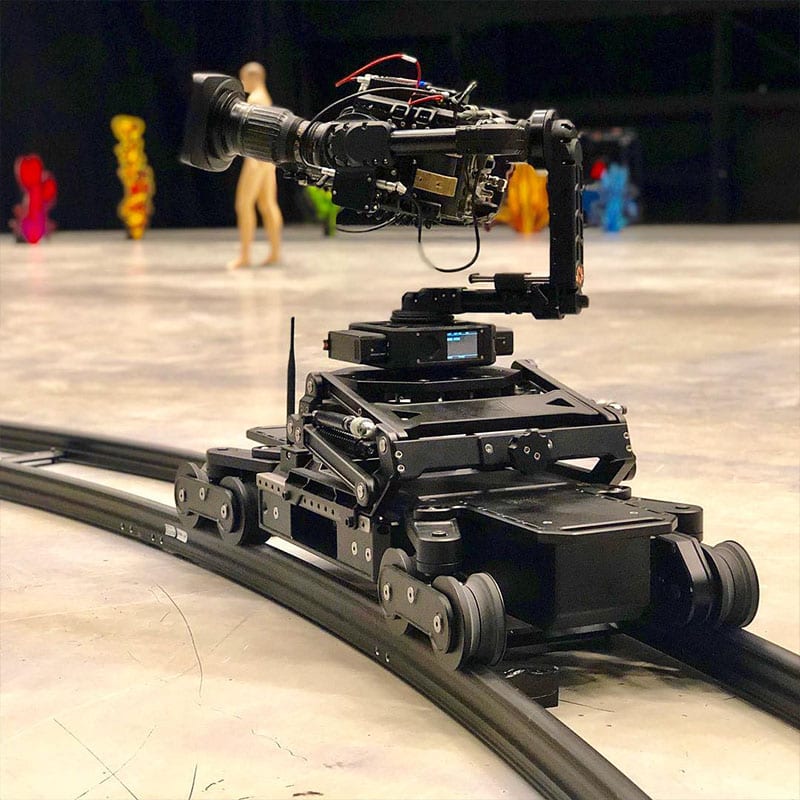 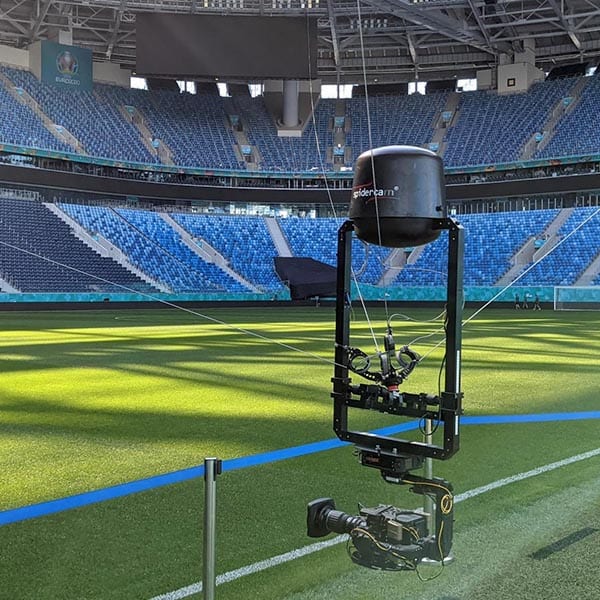 The most common camera angle in TV broadcast is at eye level and in front of the object. This is typically made with a shoulder camera mounted on a tripod with a long zoom lens and this is standard at all TV productions. The camera is controlled by an operator behind it and therefore the camera is placed in the back with for example 100 x zoom lens. This camera is often regarded as the main camera and shoots most of the talking at for example a stage show. Since they often has a big zoom lens, these cameras are used for all kinds of framing, from close ups of talking heads to wide shots of the whole setting.

If you want to know more about the standard cameras for live broadcast productions, please watch this detailed 10 min video:

Shots from a low angle make the object look powerful and at concerts a camera is often placed just in front of a stage at foot level for this reason. Many TV productions install a remote rail dolly with a NEWTON stabilized head that moves along the stage and produces both moving and standstill shots at this worm’s eye view. These shots are normally wide and show the whole artist or an ensemble.

For wide overviews, a camera with a wide lens are often mounted on a telescopic crane or cable cam, and moves over a stage, a race track or an audience.

Sometimes helicopters or drones are used to deliver live feeds above buildings or sporting grounds but drones are usually not allowed to be used over people for safety reasons. These bird eye views are used to establish the beginning or the end of an event but also to show the whole context or to set the tone.

Zooming during a shot can create dynamic effects and zooming out from a singer during the chorus can add a feeling of power and space. This is often combined with moving the camera backwards to speed up this effect and typical tools are camera cranes and cable cams.

Changing focus can be used to shift the viewer’s attention to a new part of the frame and when you change focus mid shot to a different point, it’s called rack focus. For example, the start of a shot is focused on a character in the foreground, but the camera operator racks focus mid-scene so that character becomes blurry and an important object in the background becomes clear. A rack focus is similar to a zoom shot in that the camera does not actually move, it’s just the lens that is operated. 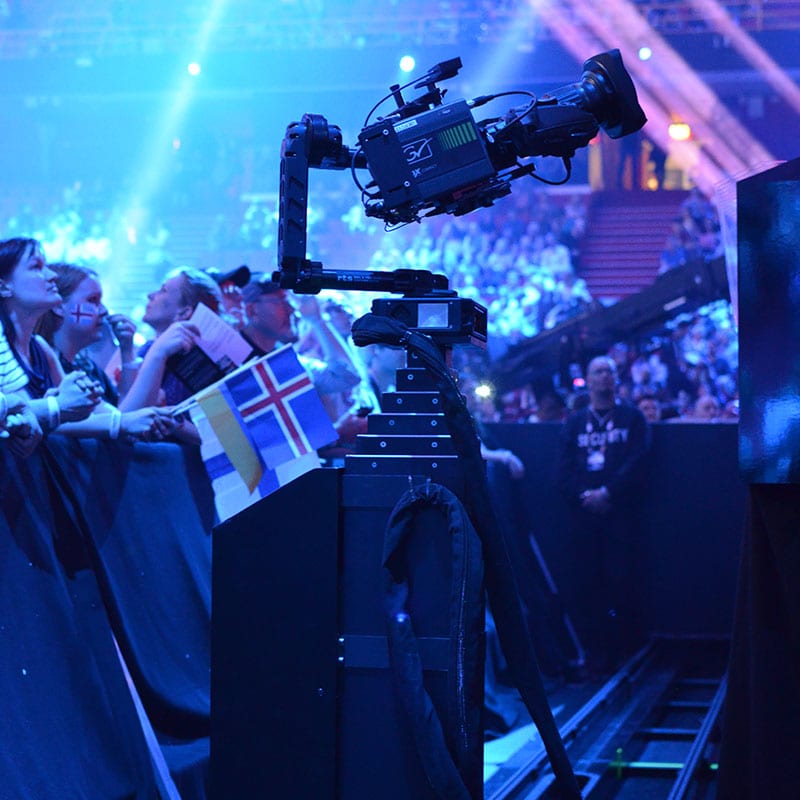 Trucking low angle shots that also can pedestal up, in front of a stage. 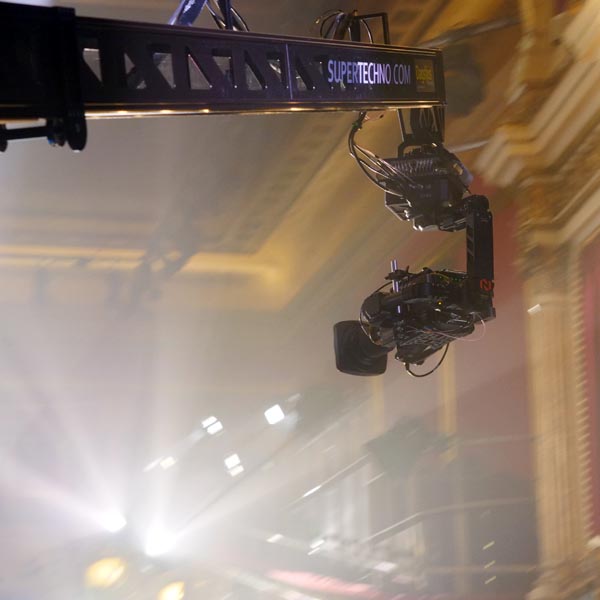 High angle shots with a telescopic camera crane, that can move in all directions.

A big broadcast camera on the shoulder is very fast way to get ready and it’s quick to move into a new position. However since there is no stabilization, moving while shooting is very limited.

A steadicam is a wearable harness attached to an iso-elastic arm, that is balancing a camera, monitor, wireless video link and batteries. This enables a camera operator to walk while still producing dynamic steady shots and almost all live TV shows has one of these. The camera operator can for example walk up on a stage for a trucking close up shot and then quickly walk down again before cutting to the next camera. However, in doing so, the steadicam operator blocks the view for the audience on site and for example Metallica uses a Spidercam 3D cable cam on their tours, to keep the stage clear from other personnel.

Another way of producing steady shots while walking is to hold a lightweight camera gimbal by hand or with vest support, but this is a little more common in cinema production. However, there are TV productions where holding a gimbal is more practical than a steadicam, and one example is the show Dancing on Ice, where a figure skater with a support vest holds a remote controlled NEWTON gimbal.