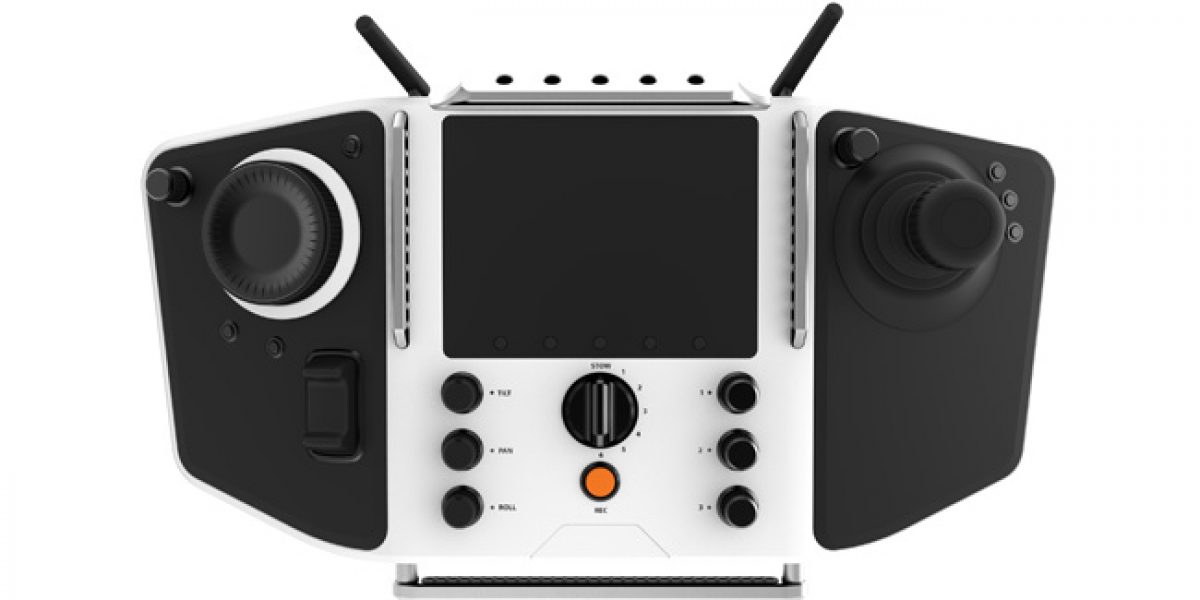 Intuitive Aerial AB (publ) will introduce a compact, ergonomic controller for the AERIGON™, the airborne camera platform for professional film and broadcast production, at IBC2015. The DOMINION controller is a portable device that allows camera operators to guide camera movement, focus, and other camera settings on board the AERIGON while in flight. Broadcasters, cinematographers, directors, and production teams now have even greater control when capturing aerial footage using virtually any modern camera, thanks to AERIGON’s high payload capacity and industry-leading stability and precision.

“AERIGON provides an amazing airborne platform for professional cinematography,” said Austin White, owner and pilot at USA Sport Inc. “Adding new gimbal controls takes that precision to the next level. The combination of drone movement and gimbal controls is like an aerial dance and gives me options for shots that would have been impossible before.”

The DOMINION was previewed at NAB Show 2015, where White used it for AERIGON demo flights. The DOMINION, which is now available for shipping, provides wireless, precision control of the remotely operated AERIGON gimbal, camera, and lens. It features a rugged, water-repellent machined aluminum body with a large high-resolution and low-friction focus wheel, iris knob, zoom rocker, start/stop button, and additional customizable buttons and switches. All buttons, switches, and potentiometers are user-assignable with multiple programmable user profiles that can be stored on an SD card. Each side of the body has an integrated NATO rail for mounting monitors, attaching accessories, and for weight support.

“After using the DOMINION at NAB, I will never go back to a standard radio controller,” said White. “Everything is right there – FIZ controls and the option to begin shooting after you’re airborne. For the first time I am able to switch focal length while flying. It’s a huge advantage to be able to change any of the camera settings in flight.”

Adjusting Settings on the Fly
The DOMINION communicates with the AERIGON gimbal and camera system at a distance of up to 3,000 feet using a reliable 2.4 GHz frequency-hopping spread spectrum signal. The five-inch high-resolution and sunlight readable display provides users with a responsive GUI offering full control over camera and lens, as well as enhanced gimbal telemetry for monitoring performance and image stability.

“We only have minutes in the air, which turn into seconds really quick,” White explained. “With any other drone and gimbal I have to figure out the settings on the ground before launching. This can be tricky as, for example, when the sun is setting. It’s guesswork, trying to anticipate what camera and lens settings to use. We only find out if we got the settings right once we’re shooting and then, if they’re wrong, it’s too late. With the DOMINION controller, I can adjust camera and lens settings on the fly. This is huge.”

The Next Step in Live-Action Cinematography
“The AERIGON is the one-and-done drone,” said White. “Many drones limit you to one camera, one lens. You can’t tell a director, ‘We can only use a 24 mm lens for this shoot.’ With my AERIGON, I can say, ‘OK, you want to use an Alexa today? No problem. You want to use that 120 mm lens? No problem.’ It’s the only drone I need and it gives me confidence every time I get to the set because I know I can achieve whatever I’m asked to do.”

The AERIGON is the only professional cinema drone designed and manufactured for use with Hollywood-standard cameras and lenses. It can carry over 20 lbs. of camera equipment plus gimbal. The AERIGON gimbal features an advanced stabilization system that works with heavy cameras, including professional zoom lenses and full FIZ (Focus, Iris, Zoom) controls. It has been used effectively with cameras such as the RED Epic, ARRI Alexa Mini, and even the Phantom Flex4K. Sturdy, detachable legs ensure safe landings and form a protective cage around the camera and lens. The AERIGON has been used on feature films, including Avengers: Age of Ultron, Into the Woods, and other high-profile projects currently in production.

“Intuitive Aerial is the premiere pro cinema drone manufacturer,” added White. “This is not a drone and gimbal I threw together in my basement. When I go on set, people crowd around to see my AERIGON. It’s an amazing machine in every respect. The DOMINION gives me more precision, more control and adds to the confidence I already feel bringing my AERIGON on set for a shoot.”

“We’ve got only enthusiastic feedback from pilots who have tested the DOMINION with the AERIGON,” said Robin Kahlbom, CEO at Intuitive Aerial. “We’re excited to show it off at IBC and in the Drone Zone next week.”

The DOMINION controller is also seamlessly compatible with the NEWTON remote stabilized camera head, which Intuitive Aerial will be launching at IBC2015. The DOMINION controls the head, camera, and lens via dual frequency wireless communication.

Intuitive Aerial will bring its complete product line-up to IBC2015 in Amsterdam on September 11-15. Visitors to IBC can see the AERIGON, the DOMINION controller, and the NEWTON head at Stands 1.A69 (Vislink), 11.C70 (RED Digital Cinema), 0.G02 (BeyondHD). For more information or to book a demo at IBC, contact Emelie Svensson at emelie.s@intuitiveaerial.com or +46 70 222 47 97. In the Americas, for more information about the AERIGON, FAA 333 exemptions, or to book a demo, contact Eric Bergez at eric.b@intuitiveaerial.com or +1 818-495-2230.

About Intuitive Aerial AB (publ)
Intuitive Aerial is an international manufacturer of professional remote camera systems for high-end cinema and broadcast applications. The company makes the AERIGON, the industry’s first remote piloted aerial camera platform (UAV) for professional cinema, broadcast and commercials productions. The AERIGON has been trusted to fly cameras on feature films such as Into the Woods and Avengers: Age of Ultron and on broadcasts such as BBC’s nature doc series One Planet. It also manufactures the NEWTON, a stabilized remote camera head for broadcast applications. Both remote camera systems are controlled by the Intuitive Aerial DOMINION controller. Further, the company provides certification assistance and flight training for its customers worldwide.