How the biggest wildlife-documentary maker in the world, used a NEWTON stabilized head with a Phantom Flex 4K camera, on a M-series buggy, to pioneer in film making

In Jan 2018 it was finally premiere of the highly anticipated BBC one wildlife documentary series Big Cats, which BBC describes is uncovering the secret lives of big cats by the use of the latest technology and scientific research. Through two years of production and 30 filming expeditions across four continents, the crew from the BBC’s Natural History Unit managed to capture an unprecedented 33 out of the 40 species of the cat family: from man-eating swamp tigers in the Bay of Bengal to the ghostly Canadian Lynx. However, one advertised character, and the star of the majestic opening footage, was a cheetah tearing across the Namibian desert, with exquisite slow motion close-ups capturing every detail in its leg movement and paw placement.This cheetah scene was highlighted in the critical acclaim of the press and to repeatedly impress the audience must be a complicated mission for BBC with recent big productions such as Planet Earth II and Blue planet II setting the bar. Director and producer Nick Easton explains “The bar we set for ourselves is always rising. No-one wants to see the same shots in a different program. So, each series we make we have to push tech further than it’s currently configured, combining technologies for the first time and always going for shots that no-one’s made before.” For Nick Easton there were also clear challenges in delivering intriguing footage of these animals renowned not only for their speed but also the ability to turn and twist at a whim. “The problem with filming cheetahs is fairly obvious. They’re the fastest land animals, so you can’t follow them running on foot, and they’re quite slender and nimble so driving alongside in a truck is too dangerous”. To be able to deliver something fresh, the production team needed to get closer and more personal to these animals than ever before and to catch never-before-seen footage of a cheetah at full-speed, the film crew needed equipment that was just as quick.

To obtain this extraordinary footage BBC brought in wildlife cameraman Rob Drewett and buggy operator Andy Nancollis who used their own invention, a remote controlled buggy, to move the camera alongside the sprinting cheetahs. The buggy was also equipped with a NEWTON S1 stabilized camera head operated from a separate console in order to maneuver and stabilize the camera. Through this pioneering combination of technologies, the team could drive the buggy only a few meters beside the running cheetahs and by that creating the closest tracking shots ever filmed of cheetahs on the run.

Rob Drewett is an experienced wildlife cameraman with credits in several BBC series, recently he was for example chasing flying locusts in the BBC documentary Planet Earth II. His work encouraged him early on to develop a passion for advanced camera movement and together with Andy Nancollis he is the co-founder of Motion Impossible, a company designated to innovations in robotic dolly systems for film production. In the production of Big Cats they really put their technology to the test and their buggy, the Freestyle Mantis, has a top speed of 30 mph while cheetahs have at least the double. To capture the high speed movement of the world’s fastest sprinter they equipped the buggy with a Phantom Flex 4K resolution camera which is renowned for its intriguing slow motion capabilities at 1000 frames per second. To supplement these extremes the package was made complete with a NEWTON S1 stabilized camera head from Newton Nordic, a Swedish company also at the forefront of technology in film production. Newton Nordic was for example the first to develop a turn key drone, the AERIGON, which could fly a Phantom Flex camera. On the buggy, the NEWTON stabilized head softens out the vibrations from the bumpy desert ground, stabilizes the horizon and enables the camera to be remote controlled independently from the buggy. Together this equipment could capture the fast cheetahs through long and intimate takes with exquisite slow motion, steady picture as well as level horizon. 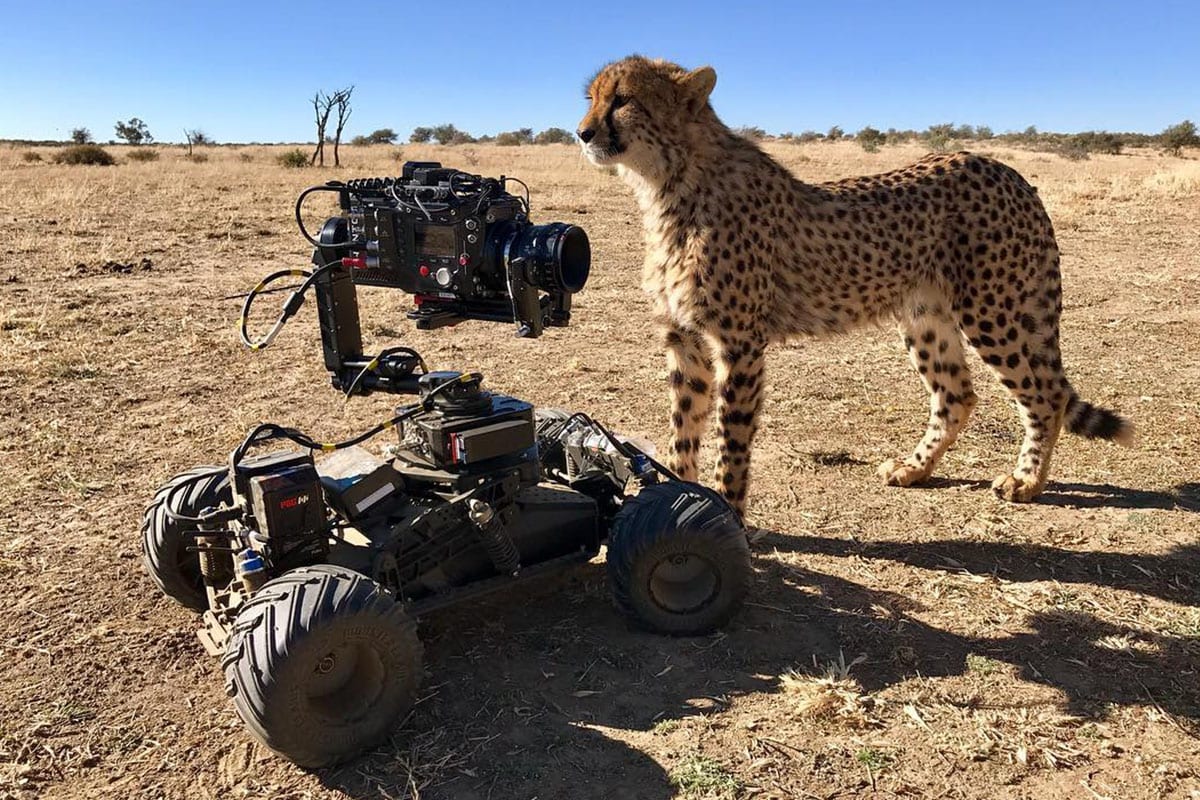 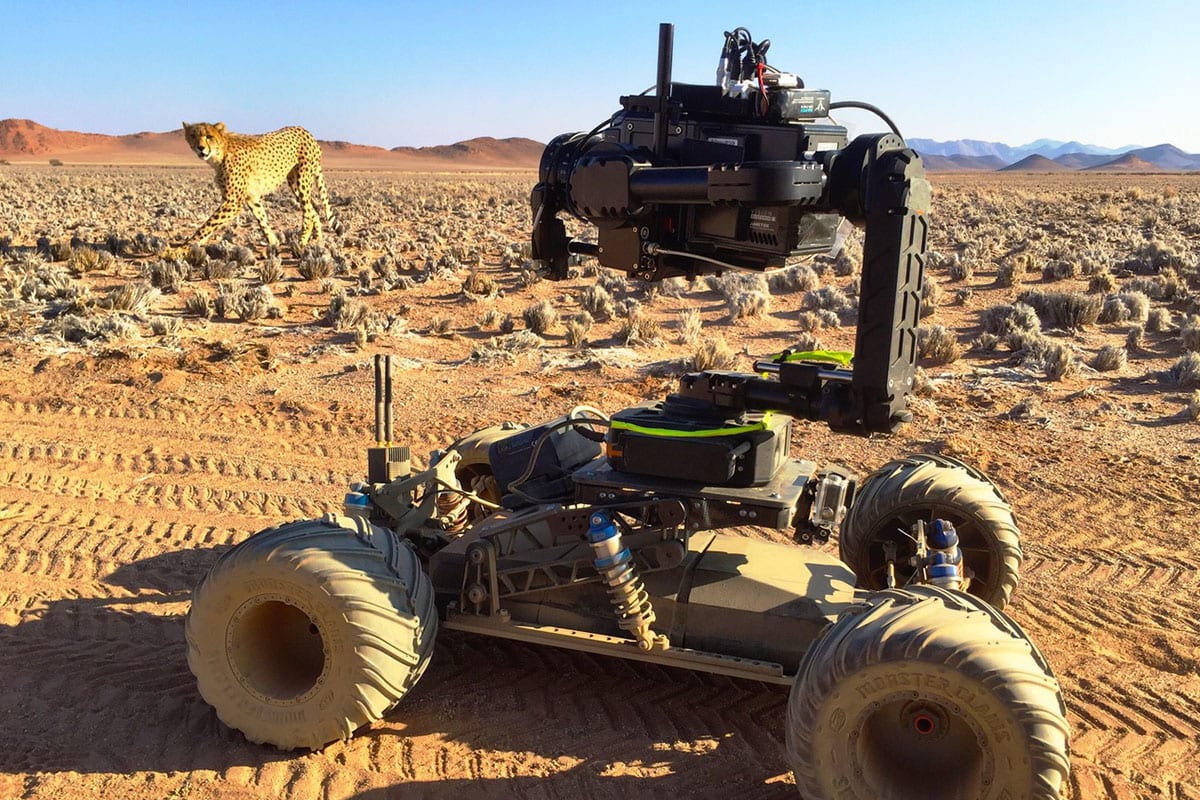 When evaluating the choice of gear, Rob Drewett describes: “This combo was great to work with and it was so rewarding to see everything come together and deliver these results. First off, the Freestyle Mantis buggy worked like a charm and we were especially pleased to see the performance of the 4 stage dampening system we have put on it. The suspended rubber wheels absorbing the greater shocks, combined with the V-Con (low-level vertical axis stabiliser) and micro vibration rubber mounts, removing the smaller vibrations, really came to full use while speeding on the rough Namibian plains.”

Rob continues “Moreover, the NEWTON is my go to stabilized head, it never fails me. I have used this system in all types of environments and pushed it to its limits both regarding payload and terrain. The RF works from a long range and the NEWTON remote controller is the best you can get. The torque from the head is powerful enough to hold the Phantom Flex at high speed over rough terrain, it does not get much better than this for the price. Once you have set up the NEWTON and locked in the balance you are good to go for the whole shoot never really having to readjust, which is vital here since time is limited with these animals. We just set the pan gains high so we could whip the camera around quickly with the action of the Cheetahs.”

Just as Rob, Nick Easton loves shooting cheetahs but the new technique with a buggy did not remove all complications of the process. Nick deliberates: “It was clear from the off, that these cats loved a chase, and they relished the chance to chase something new. Predicting when and where they would run would prove to be more difficult. It took days of graft, but the plan did eventually come together. Of course, the cheetahs were more than a match for the buggy, which after just a few days as lure and camera man, looked like it had been roving on Mars for decades.” Rob Drewett continues: “The shoot for the cheetah scenes took about 10 days in the desert and of course we had to take some measurements to protect the camera and lens from the sand. The buggy we stripped down and blasted the sand off with can air but the NEWTON head just got a light brushing down with a paint brush. It was fine!”

“It took a lot of work to get everything right but it was all worth it when we at the end of each day filming could witness the astonishment on the teams faces as they reviewed the days rushes” Rob Drewett says. As mentioned at the start, the film crew are not alone in these sentiments, with several papers especially praising the cheetah opening footage. As Stuart Winter at the Daily Express puts it: “the crew have recorded arguably the most gripping imagery of the big cat ever seen on television screens.”

Watching the shots we knew these were special images that revealed a new side to a very special animal. These are some of the best images that have ever been captured of cheetahs on the run. 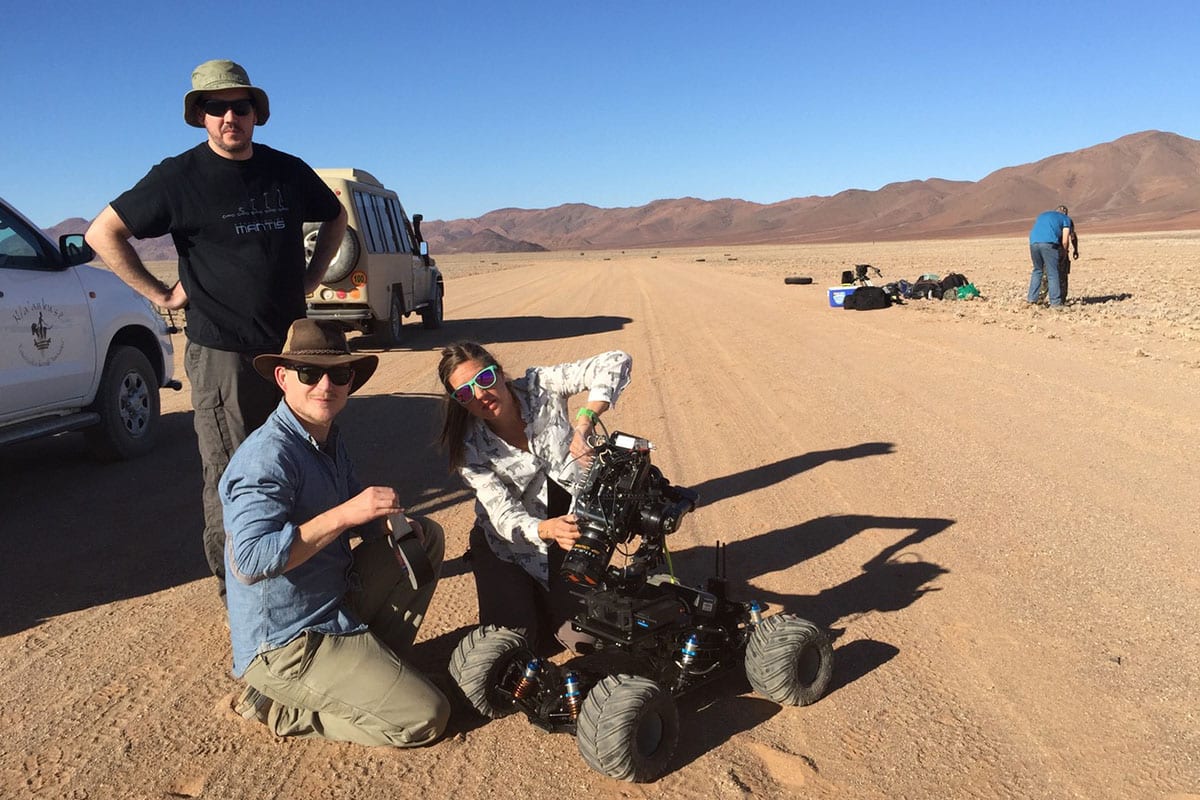 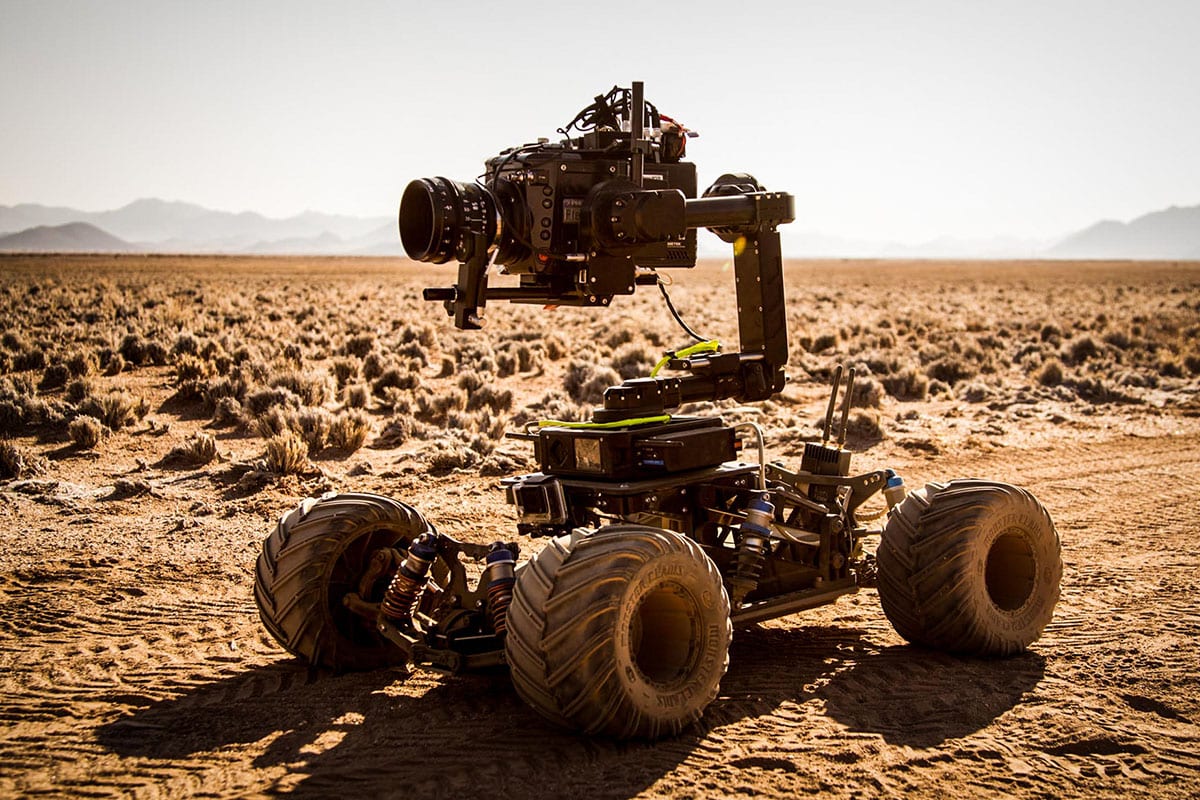