RailCam Robotic Systems is based in New Jersey and is an acclaimed provider of moving camera systems to live TV events across USA. RailCam owns several NEWTON stabilized camera systems and the last year they have for example provided them on cable suspended platforms and telescopic rail systems to the Oscars and the Democratic National Convention. For the broadcast of Superbowl 2021, they brought one Mini-C and four NEWTON stabilized heads mounted on telescopic towers and rail systems, placed around the stage of the halftime show with the artist The Weeknd.

The robotic camera systems that RailCam works with has carefully been selected over the years and Brian Sheid explains: “We work in live TV and the experience has to be excellent every single time. The gear just cannot fail on set. Like now when we broadcast the opening shot of the Super Bowl halftime show, you’ll never get a second chance at that. As a technician, you develop certain confidence in a piece of equipment. Your job is to keep everything working, so you obsess over the things that might stop that.” Brian Sheid continues: “All dolly systems and heads performed flawlessly during the show and we are very happy with the performance. For example, The NEWTON heads are something I never really have to worry about. It’s a piece of equipment I can trust, which makes my job easier and protects my company’s reputation.”

These moving camera systems are operated live by skilled cameramen, that are brought in by the technical director, and they often operate one complete system by themselves. The operator typically controls the towers and rail systems with their feet, for example left/right with one foot, and up/down with the other. Then he/she controls the camera pan/tilt/roll with one hand and zoom/focus with the other. RailCam has never seen the need of pre-programmed camera movement and Brian Sheid explains: “Many people think programmed moves is a great idea until the artist walks faster or stops for a second and the camera keeps on going right past them. Also, the magic behind a robotic camera not looking too robotic, is to have a human operating it.” For this event, RailCam brought four technicians to install their robotic camera solutions and to be stand by during the show. A few of the technicians had worked at Super Bowl before, but this was the first Super Bowl assignment for RailCam as a company.

To create a cinematic look, The Weeknd performance was broadcast with Arri cine cameras and the NEWTON stabilized remote heads all featured Arri Alexa Minis. To integrate this type of cameras with the broadcast facility, these NEWTON heads were equipped Multidyne Silverback converters on their spines, connecting a SMPTE cable.

CAMERA 1
A RailArm in front of the stage, holding a NEWTON stabilized camera head. The RTS RailArm is a rail system with an arm, that can lift the camera from a very low position. The rail track ran 36 feet along the stage and the whole system was operated by Shaun Harkins.

CAMERA 2
A RailTower in front of the stage, holding a Nettmann Mini-C stabilized camera head. The RTS RailTower is a telescopic tower on a rail track and Rick Compeau operated the rail dolly while Kevin French operated the tower and camera.

CAMERA 3
Also in front of the stage, there was a new RTS telescopic tower which can lift the camera from 9 to 35 feet. It featured a NEWTON stabilized camera head and was operated by Jay Kulick.

CAMERA 4
Jay Kulick also operated a RTS telescopic tower on the very top of the stage, which shot reverse angles of The Weeknd in the middle of the performance. This tower could lift its NEWTON stabilized camera head from 5 to 11 feet.

CAMERA 5
Finally, there was a NEWTON stabilized camera head mounted on a MAT XS+ telescopic tower inside the stage as a back up for the wireless handheld camera in the infinity room. This was never used but was ready to be operated Kevin French. 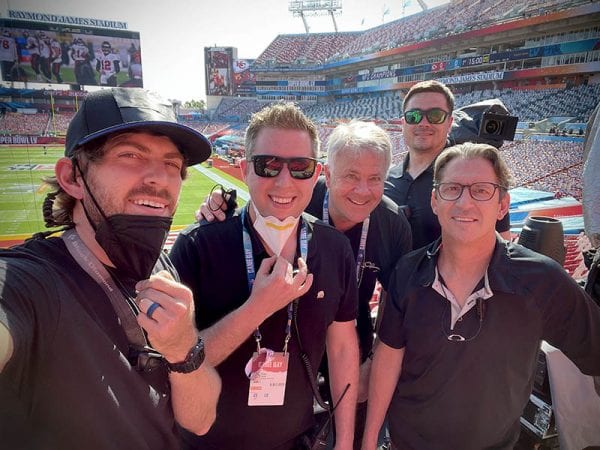 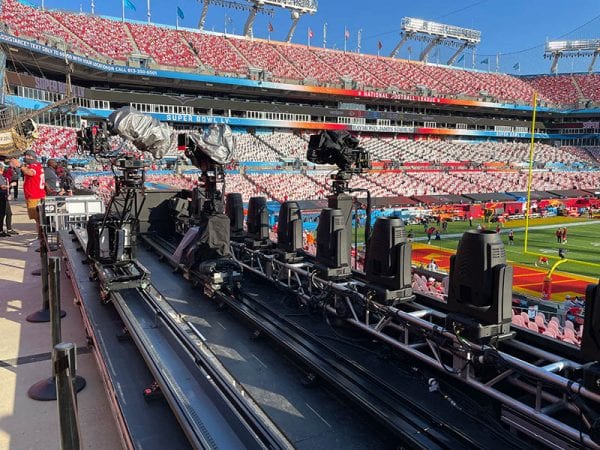 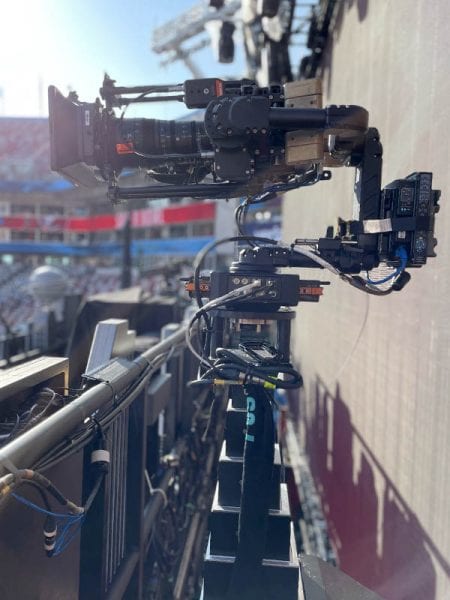 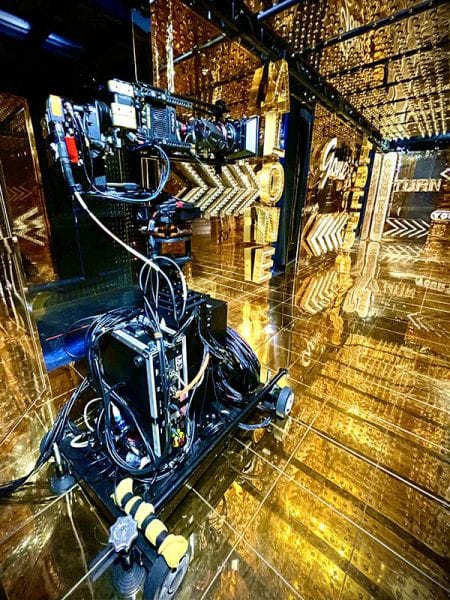 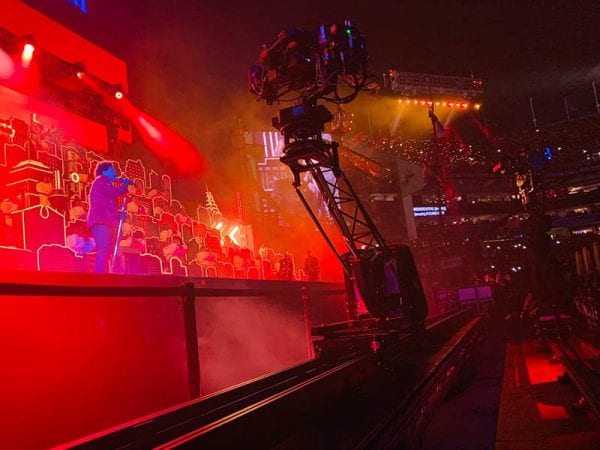 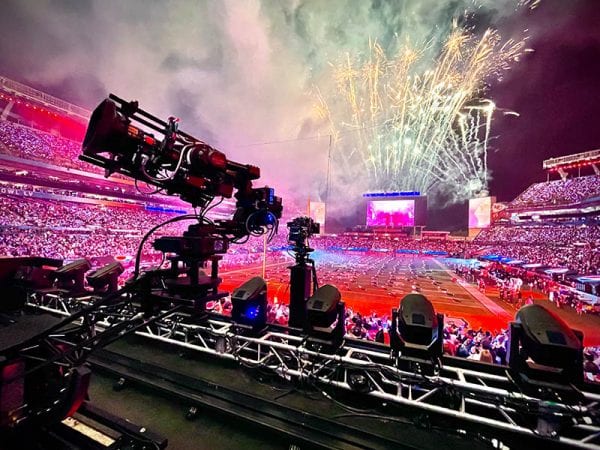 Controlling camera and lens with a NEWTON stabilized remote head 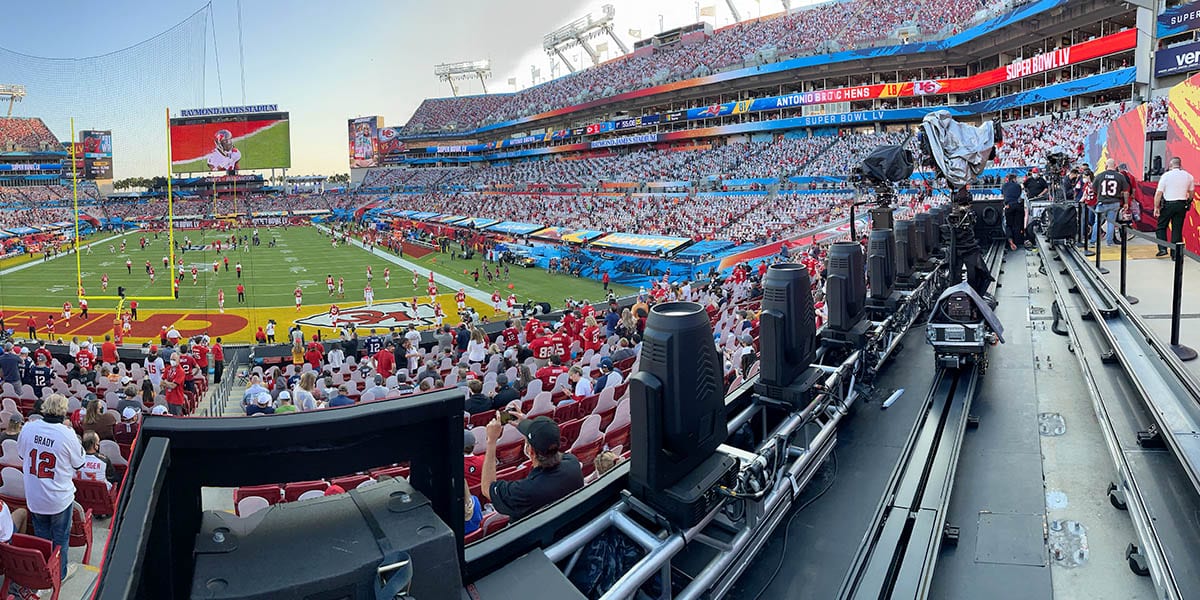 Moving cameras between the audience and The Weeknd, broadcasting it live to 100 million TV viewers