The AERIGON drone pioneered in its field but has now been discontinued. Our first version, The Black Armoured Drone was launched in 2013, and the succeeding AERIGON was sold 2014 – 2017, under our previous company name, Intuitive Aerial.

AERIGON was designed for strength with a lightweight body of prepreg carbon-fiber consisting of a 6 arm helicopter and a stabilized camera gimbal standing on 3 feet. Each helicopter arm has 2 counter-rotating rotors with a proprietary power distribution system providing the power and precision to fly professional camera configurations with pro zoom lenses and full FIZ (Focus, Iris and Zoom) control.

The system demands two operators with the helicopter controlled by a Futaba controller and the camera gimbal by our propitiatory controller, same as the NEWTON series. AERIGONs were shipped worldwide to pilots praising the power and precision of AERIGON in flight while cinematographers and camera operators enjoyed the stability and accuracy of the gimbal’s proprietary control and stabilization system.

Following the demand for gimbals on other platforms, we refined the gimbal technology from AERIGON and in 2016 released the NEWTON stabilized head, which has now been shipped in considerably higher numbers. 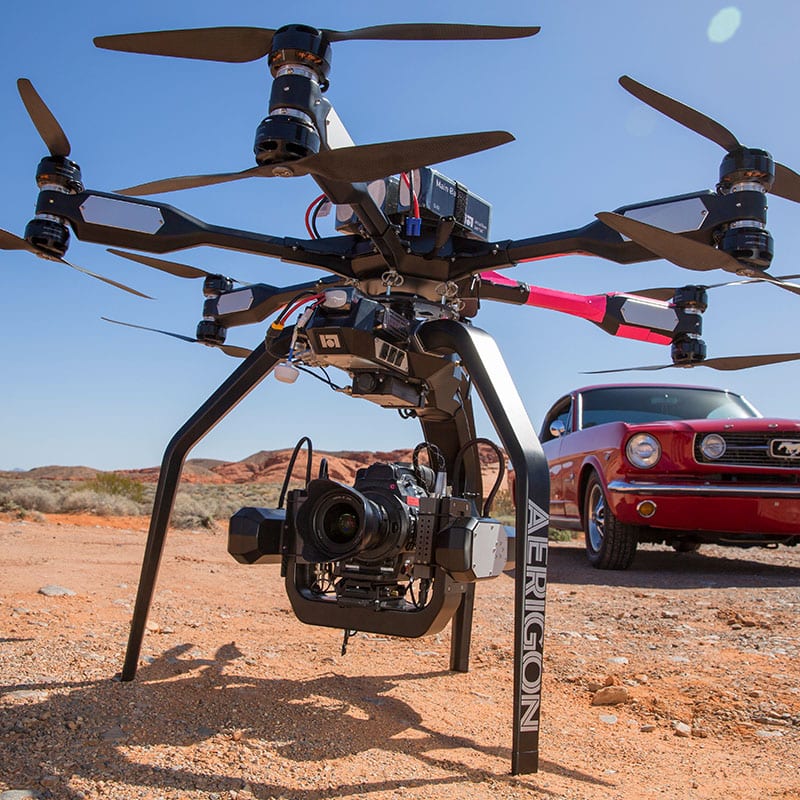 7-15 minutes depending on payload.

Return of the Giant Killers 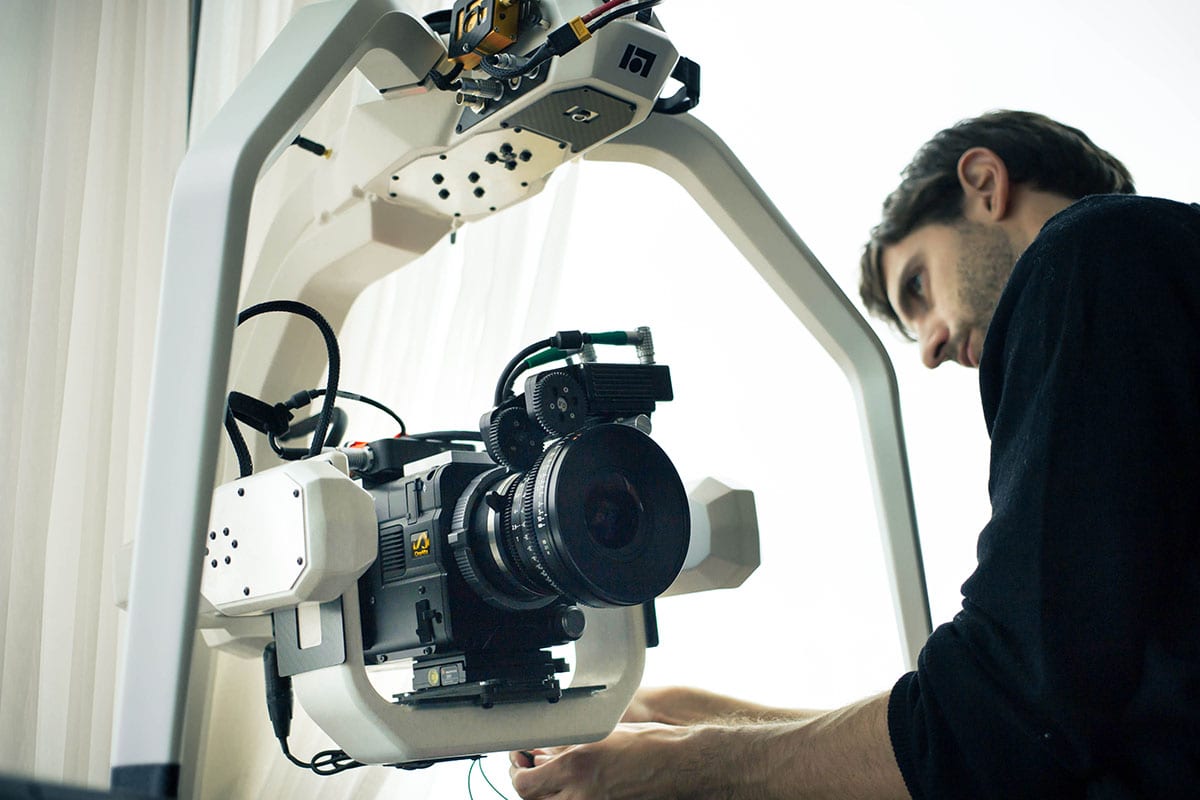 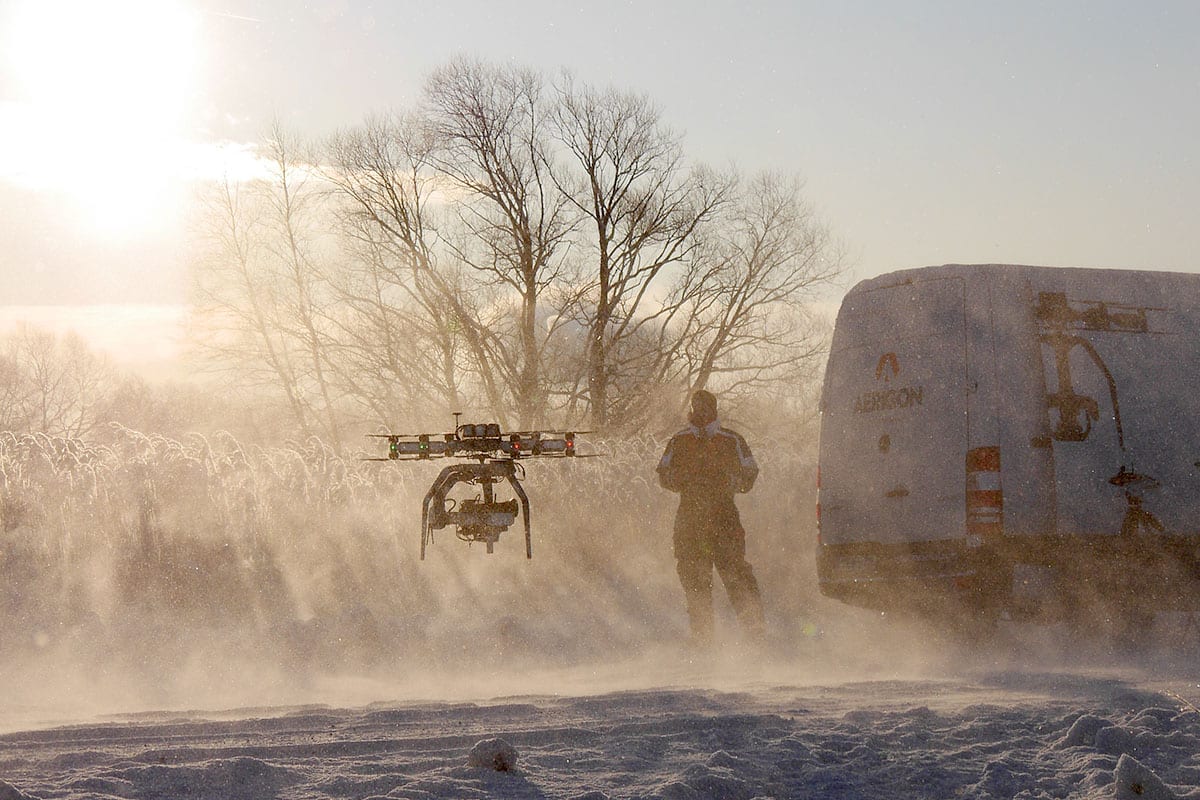 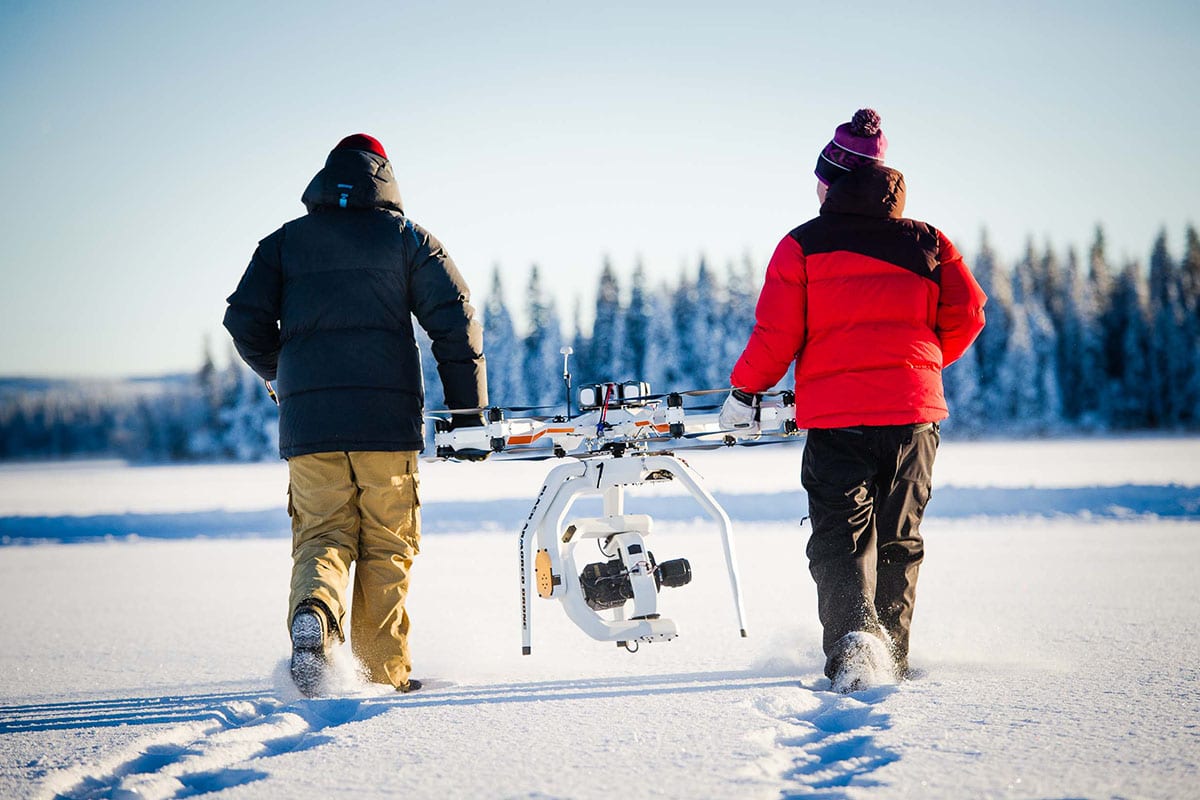 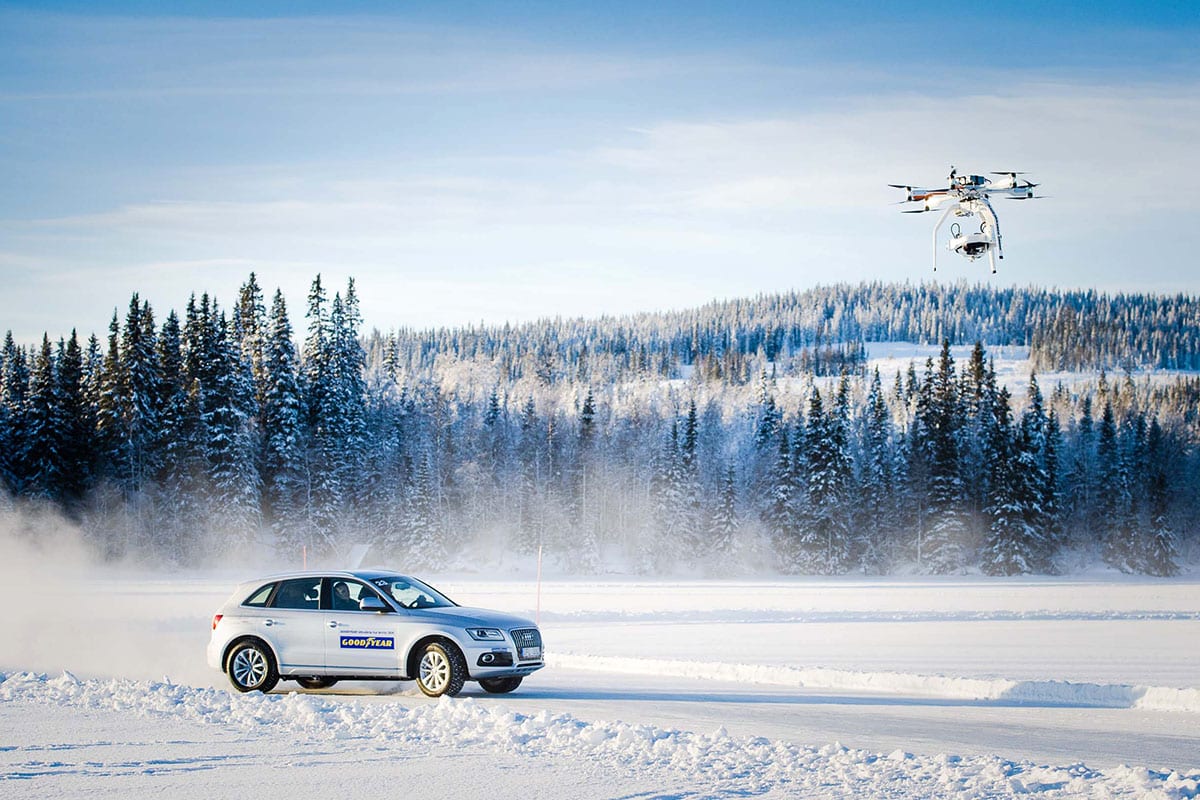 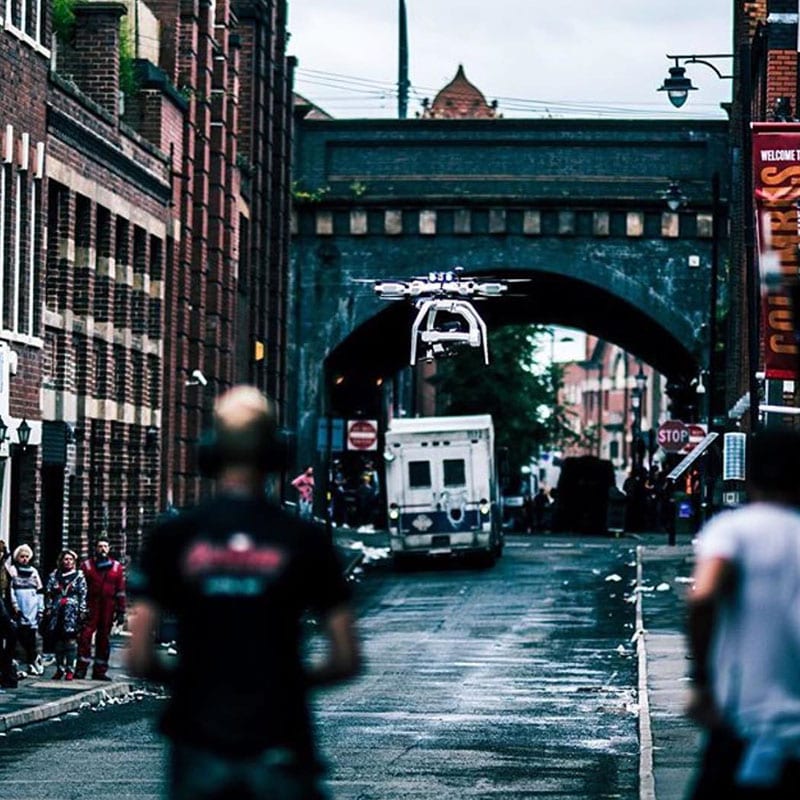 Helicopter Film Services on set for Ready Player One (2018). 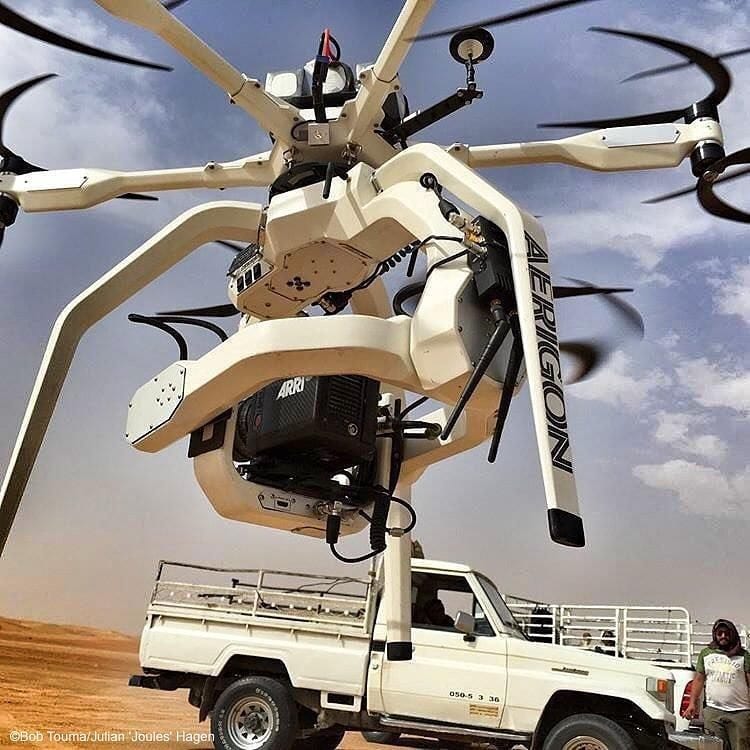 “We choose AERIGON for its superior performance and stability. Because we’re at the top end of film production, we work with high-end cameras and need a professional cinema drone that provides stable images. The AERIGON is that drone.”

“Drones can leap about, but the AERIGON is the most stable drone we’ve seen without depending on post-stabilization. There isn’t the buzz or vibration with the AERIGON gimbal.”

“There were shots that we could only do with the AERIGON. For one shot, we flew it from the top of a building, passed it through a portico, and brought it out the other side. You can’t really do that with a wire cam.”

“It’s when we add a zoom lens to the camera, that the AERIGON becomes the only cinema drone capable of doing the job. The weight shift of adding one of these lenses to the camera doesn’t affect the balance. With the AERIGON we can choose lenses that fit, are light, and that productions like.”

“Drones allow filmmakers to design really creative shots and achieve them. I love having the ability to realize shots with the AERIGON that others perceive as impossible. With the AERIGON, we have more flexibility and a more diverse palette to work with. We get shots that everyone’s thrilled about.”

“The AERIGON drone was able to fly at lower altitude than the helicopter, giving us more dramatic sweeping camera moves than we’d have been able to get otherwise.”

“It was quick and efficient to get it flying, with real-time visual feedback. The resulting footage was great, stable, and clean, which was an absolute necessity as we were using it as background plates, into which we added CG VFX elements.”

“The AERIGON is unique in that it’s the most stable system out there. We chose it because it was the first to reliably fly a 4K camera, which is our main acquisition format.”

“Other drones look like Meccano sets with their wires hanging out and parts attached with tape. Each of the AERIGON’s parts is a finished unit, meaning there’s less wear and tear on the system.”

“The lions aren’t waiting for us to assemble our equipment before they attack. The action happens only once and there’s no time to sit and fiddle. The AERIGON works for us because it’s plug and play.”

“AERIGON provides an amazing airborne platform for professional cinematography. Adding new gimbal controls takes that precision to the next level. The combination of drone movement and gimbal controls is like an aerial dance and gives me options for shots that would have been impossible before.”

“After using the NEWTON controller at NAB, I will never go back to a standard radio controller. Everything is right there – FIZ controls and the option to begin shooting after you’re airborne. For the first time I am able to switch focal length while flying. It’s a huge advantage to be able to change any of the camera settings in flight.”

“Intuitive Aerial is the premiere pro cinema drone manufacturer. This is not a drone and gimbal I threw together in my basement. When I go on set, people crowd around to see my AERIGON. It’s an amazing machine in every respect. The NEWTON controller gives me more precision, more control and adds to the confidence I already feel bringing my AERIGON on set for a shoot.”

“Without question it’s the best all-in-one cinema and broadcast UAV available. Our crew of professional pilots and photographers who specialize in this unmanned world made the decision after extensive research, not only because of the UAV but because of the team behind it.”

“I just wanted to let you know that we used our new AERIGON to shoot a commercial yesterday. I was flying long shots at distance and low to the ground with lots of speed and she was beautiful to fly. Very responsive and lovely to control, so just thought I’d let you know thanks for the great work. Gimbal was solid and delivered and as a result we have a happy Director and his client is very satisfied with the results :)”

Director of We Are Blood

“The AERIGON was amazing to use for the film!!! Love everything we got with it.”

“The AERIGON by Intuitive Aerial is the best unmanned aerial vehicle (UAV) on the market for carrying the heavier payload of the RED Dragon and accompanying cinema lenses. Its stabilized gimbal and precise flying capabilities helped us to obtain amazing aerial angles that a full-size helicopter could not reach.”